Taken together, these three words describe a martial art created by Morihei Ueshiba O Sensei, in which students learn a way of being that deeply receives an attacker’s energy, and then redirects that energy to a harmless place.

Aikido trains all aspects of each student – mind, body, spirit, and relationships – in order to develop the way of peace and harmony within them.  Through solo, partnered, and group practice, students evolve self-confidence in a much wider range of situations; aliveness under pressure; embodied experience of themselves (instead of mere intellectual understanding); ultimately yielding higher levels of functioning in the face of aggression and heightened stress.  All while having a fun, intense, social, and enlivening workout.

Aikido is a purely defensive, non-violent martial art which uses the attacker’s energy to pin or throw them. It has been called “the Art of Peace,” for it teaches self-defense techniques designed to protect the attacker from harm. As much as it is a physical practice, it is also a study in:

When someone attacks, an aikidoist will move in the same direction and at the same speed as the attacker, blending with their energy without a hard impact. Once a connection is made, the aikidoist can then take control of the attacker’s body with one of hundreds of techniques, and can then either pin them to the ground or throw them a short distance away.

Training at Aikido of Georgia covers a collection of classical techniques, combined with free-style practice and the creation of scenarios where one can practice aikido in a wide variety of life situations.

While few of us end up in physical fights very often, we all engage in conversation, business dealings, or family dynamics that aikido principles directly apply to. By practicing physical aikido in class with a teacher, we can learn how to stay safe in all kinds of conflicts. 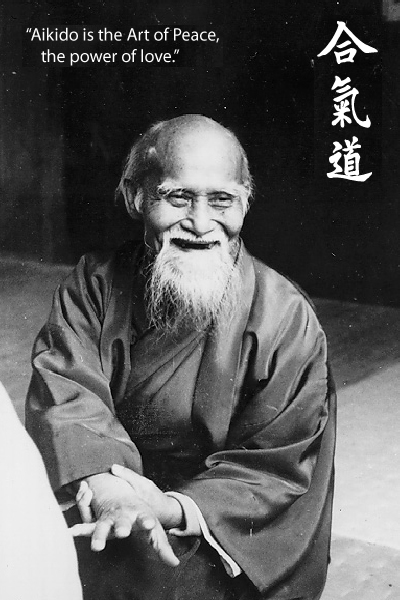 "To injure an opponent is to injure yourself. To control aggression without inflicting injury is the Art of Peace."—Morihei Ueshiba, founder